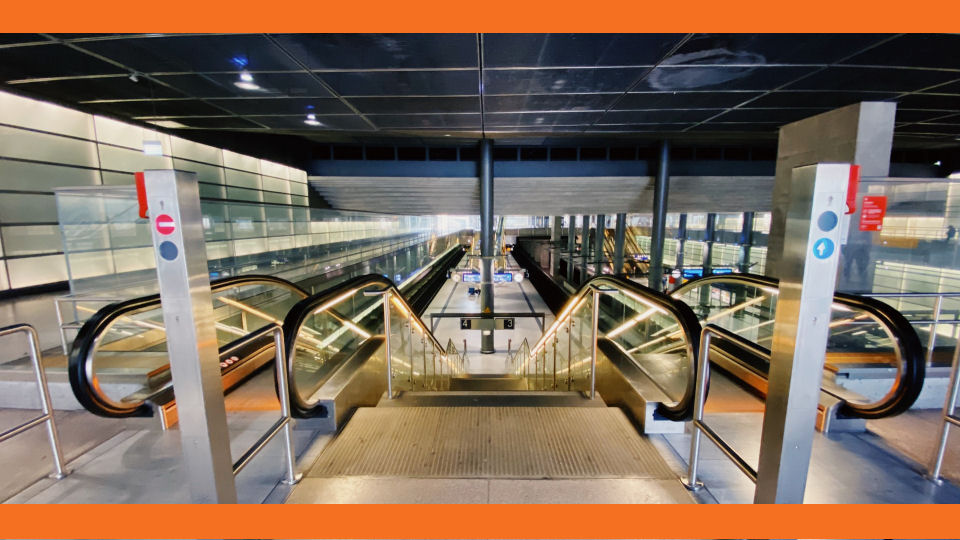 This article on energy savings was published in the Energy in Buildings and Industry journal, October 2017, by James Brittain, director of the Discovery Mill and freelance energy consultant. Find your downloadable copy below.

This case study outlines how a mix of technological and behavioral change measures led to large energy savings at the retail outlets of Heathrow’s Terminal 2.

The same lessons apply to not only airport and retail environments, but also to many other sectors and operations. This is about enhancing energy performance by connecting up design, technology, operational practices and behavior change.

The design for Heathrow's Queen Terminal, the new Terminal 2, had a big challenge around energy. To comply with planning requirements, the building, including its commercial retail and property fit-outs, had to demonstrate 40.5% less CO2 emissions compared to an equivalent development built to building regulation standards. 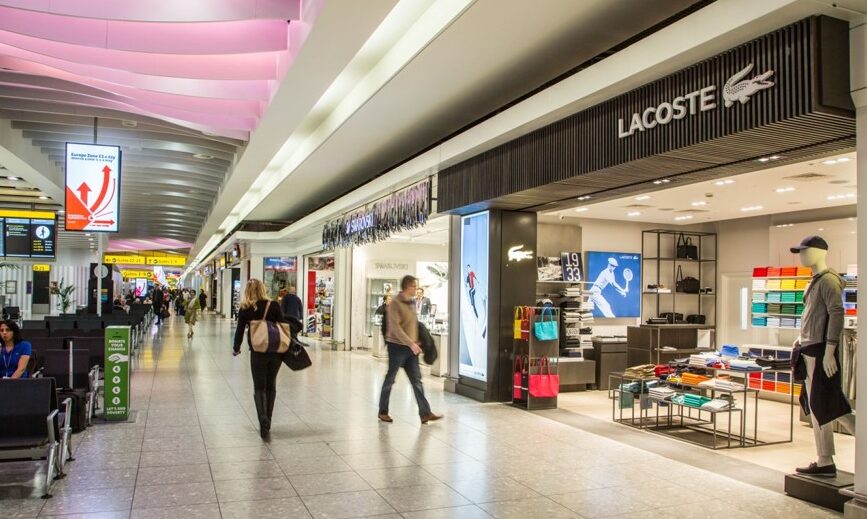 An important part in achieving this stretched target was the focus on reducing regulated and operational energy use, using a design energy targeting approach applied to all the different operations throughout the terminal building.

Heathrow’s food and beverage outlets are some of the busiest restaurants in the world. When it comes to running busy restaurants, the instinct is often to turn all the equipment on first thing in the morning, and leave it on all day. Longer running hours and risk averse operational practices and behaviors all inevitably lead to higher energy consumption.

For this project, we also needed to connect up the 46 different retailers involved to deliver great energy and sustainability performance across 186 new separate retail spaces, including 17 new food and beverage units and restaurants as well as many fashion, technology, travel, gift and duty free shops.

Download your own PDF version of the case study

This case study was published in the magazine Energy in Buildings and Industry in 2017. Click below to download the original pdf version.

To successfully drive down energy consumption, we needed an approach which would be both strategic and hands-on and delivered in partnership through collaboration.

The T2 sustainable retail project kicked off in 2012.  The Discovery Mill was contracted to be the coordinating energy and sustainability partner for the project until the opening of the terminal in June 2014.

A key part of the strategy was empowering and supporting everyday sustainability champions for the project, particularly involving those who were very much part of project delivery team so they would consider sustainability as a key component of their overall responsibilities.

By running workshops and training with lead project champions, we co-created the approach, developed the sustainability brief and set-up the tools, guidance and performance management systems. The focus was on what would make the biggest difference and how best to optimize energy and sustainability performance into operational and long-term savings.

The lead champions were essentially key-connectors, encouraging better connections between teams around energy and sustainability, and connecting up the design, installation and operational elements of what we do.

Together we ran a series of design Lead & Learn workshops for retailer teams, inviting along operational staff as well design and construction colleagues; so, for example, we were looking to more involve chefs in restaurant design and the associated energy assessment reviews.

Each unit was set a design energy target to be at least 10% more efficient per m2 than their equivalent retail unit in Terminal 5; the retail units in T5 being the most efficient examples on airport at that time.

By 2014, at the end of the design and install process, the design energy assessments predicted an average saving of 24%, against our T5 baselines, across all 186 retail spaces. This would be worth approximately £0.5m (equivalent to $0.65) of direct energy cost savings per year to retailers, plus the associated infrastructure cost reductions and additional centralized energy savings for the airport.

Success has been down to the teams involved and using some quite innovative approaches to help reduce energy demand. The simplest measures were where equipment was taken out of the design because it simply wasn’t needed!

Monitoring of the units

Sample monitoring of some of the units in operation, in 2016, has demonstrated the levels of savings that can be achieved.

Fig. 1 shows the predicted energy consumption split for an example casual dining restaurant in Terminal 2 using our design energy target and assessment approach. The energy bill for this unit is expected to be between £100,000 to £120,000 (equivalent to $127,000 to $152,000) a year, depending on operational practices. The unit is all electric, with separate air-conditioning supplied from a centralised building air-handling plant.

This is a busy restaurant with around 500,000 covers a year. 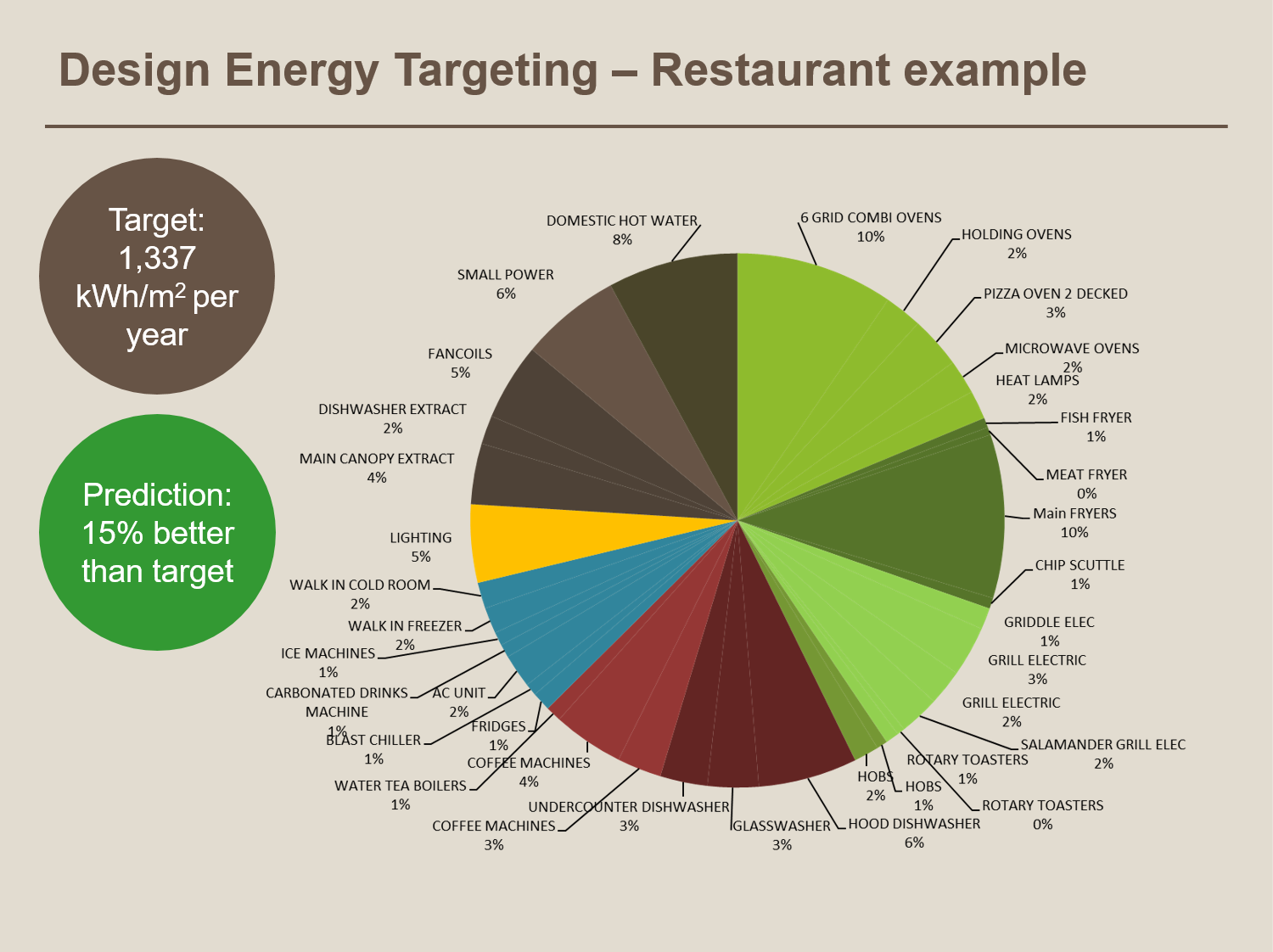 The significant energy users for this unit are ovens, fryers, grills, dishwashers, drinks machines, refrigerators, and local fan-coils and extract plant, and to a lesser extent, lighting, small power and domestic hot water.

The chart shows what we needed to focus our efforts on. After various design iterations, the fit-out team established an energy performance of 15% better than the design energy target that was set,

Monitoring in the last year has since demonstrated even better performance in practice, operating to be better than 40% less energy consumption than their equivalent T5 energy baseline.

Equipment levels across the kitchen are about 35% smaller per m2, in kW power demand terms, than much older restaurants across the airport.

For this restaurant, we are also now seeing a good correlation between daily energy consumption and daily covers; even though impact is small at the moment, we rarely see this in many units we start to monitor.

So the big question is, what are they doing right?

We find that by using a technical only approach, we often make good savings by reducing the kW required and by providing auto controls.

If we can make our systems easier to control – and connect up design and technical solutions with operations and behaviors – then we have more chance that they’re “on” only when required. Thus the energy consumption profile can literally flip on its head.

To tap into the opportunities, these designers are using high spec, fast and modular equipment which means it’s then easier for kitchen staff to control. This may mean, for example, using multi provision of the latest programmable combi ovens, toasters, Panini machines, etc.

In this example, the team also applied this concept to dishwashers. Rather than specifying a more traditional, say 27kW conveyor type machine, two 7.5kW hood type dishwashers were specified instead; this meant less kilowatts but also this allows only one to be used during the quieter periods of the day.

We drew a scatter plot for our example unit, showing plots of daily consumption against covers.

By drawing a best fit trend line through the points we can conclude that approximately 35% of energy consumption is currently variable with covers. Technically, as we aim to continually improve energy performance, we are looking to pull this line down and point it more to the origin through continual improvement and changes in operational practices and behaviors.

We also monitored energy consumption for this unit on a half-hourly basis over its busiest week of the year. This demonstrated there is some limited response to on-demand over periods of the day so we reckon there is further potential savings of another 5-10%, with even more available on less busy days.

A key part of the strategy for these units is introducing a fire-up schedule for the main energy users, which maps out “on” and “off” times over the day for the significant energy users. This provides a means of agreeing and stretching the off periods in a managed way.

For our example, this has led to toasters now being switched off at 11.30am each day, after the breakfast rush, and fryers being held off until 10.30am to prepare for lunchtime. On average, each extra hour of off-time across all the kitchen equipment is worth approximately £6,000 a year for this restaurant in energy savings alone.

One way to focus in and review operational times for particularly significant energy users is to use a technique we call daily diaries.

For example, in one kitchen, the chefs reported that the four main ovens were needed absolutely all the time, particularly in busy weeks. So during our monitored week, we asked them to keep a diary of actual demand. By the end of the week their attitudes had changed: “In retrospect, we hold our hands up, even in our busiest week, we could have turned one oven off at 11am and a second one off at 2pm.” This would be worth 5-10% energy savings in one action for this particular kitchen.

Check out this case study to find about further energy savings at this airport.

Over to you - How can BigGreenAcademy best support you achieving your goals?

10+ Years of Energy Management through People

Please log in again. The login page will open in a new tab. After logging in you can close it and return to this page.